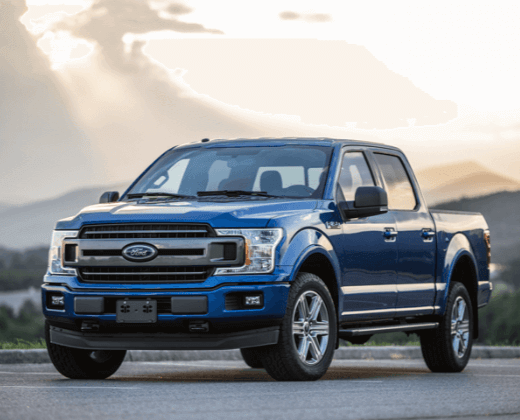 The windshield is an important safety element of your F Series F150. Not only do they keep out debris and the elements, they also help keep occupants inside the vehicle in the event of a crash. Sometimes they can be repaired, but often they require full replacement, depending on the severity of the damage.

Sunroofs add an element of fun to your everyday drive, but sometimes they break. Sunroofs typically are made from tempered glass which must be fully replaced if damaged. If your F Series F150 is equipped with a factory sunroof that has broken, you’ll need to get it replaced as soon as possible in order to avoid the possibility of water damage. Keep in mind that sunroofs can face a variety of problems, but Glass.com only provides glass replacement services on factory installed sunroofs.

Backglass acts as a way for you to see out of the rear of your F Series F150. It is also referred to as a back windshield or rear windshield. Rear windshields typically are made from tempered glass which must be replaced if damaged. These windows sometimes include additional features such as defrost elements which help to de-ice the glass in wintertime. Back windshields on hatchbacks, SUVs, and vans sometimes feature a wiper, which helps increase visiblity while driving in the rain.

Side windows offer access to fresh air, toll booths, drive-thru windows, and more. These highly functional pieces of glass are often a target for break ins though. If this happens to your F Series F150, you’ll need to have the window replaced since it’s usully made from tempered glass, though laminated glass is gaining in popularity.

Ford began manufacturing the F-Series pickup all the way back in 1948 when it was first released as the Ford F1. Since 1977, it has been the United State’s best-selling pickup and even the nations best-selling vehicle starting in 1986. That’s more than 40 straight years! Breaking down the numbers, one Ford truck is actually sold every minute of every day.

The equivalent to today’s F-150 was known as the F1 during the first generation. It was a popular farm truck which was in production from 1948-1952. This first F-Series truck was also sold in a number of other weights and configurations including a panel truck, cab-over-engine, and even a bus.

1953 came with an overhaul to the F-150 including a facelift, better motor options, a larger, updated chassis, and renaming. The second generation was actually known as the Ford F-100, which it would keep through the fourth generation ending in 1966. The 1956 model of the second generation was only in production for one year and featured a wraparound windshield with vertical pillars. This differed from the sloped windshield and pillars of other model years. Ford also offered an optional panoramic rear window.

1957 came with a huge body redesign that introduced integrated front fenders and a styleside bed. In 1958 Ford began offering factory-installed four-wheel drive which was a major advancement in their manufacturing capacities. They were the first of the other two main pickup manufacturers of the day to achieve this.

Ford drastically redesigned the pickup again in 1961, introducing a longer and lower truck with updated engine options. Notably, in 1966, a new style of front suspension was introduced. This same style was used in some F-Series pickups all the way up until 2016!

In 1967 the Ford F-100 officially became what it’s known as today—the iconic F-150. With this generation came larger overall dimensions as well as larger glass and additional trim levels with more lavish interiors.

Next up was the sixth generation launched in 1973 with modern amenities such as front disc brakes, double-wall bed construction, and a larger cabin. The engine was also updated to the more modern 5.9-liter and 6.4-liter options. Ford also made the switch from round headlights to square in 1978.

In 1980 The body and chassis size increased again when the truck was redesigned from the ground up. Fuel economy was improved by increasing aerodynamics and removing the 5.8L and 6.6L V8 M-Series engine options. Replacement options included smaller V8 and V6 engines. Power options, such as power mirrors, windows and door locks were also introduced during this generation.

The eight generation of F-150s began in 1987 with a slightly more rounded body and updated interior.

The F-150 body style was revamped again in 1992, rounding out body lines even more. This generation included an interior overhaul as well.

Ford made major updates to the F-150 in 1997 which aligned it with its growing audience of homeowner buyers rather than commercial work truck owners. The body was rounded out even more and a rear door was added to extended cab models for easier loading and unloading. A six-cylinder V-6 motor became standard.

The 2004 model year started the F-150 on a brand new platform with beefed-up bodylines, 4-door cabs, and new engines. The most notable of these features is the 4-door cab. Even standard cab trucks still featured small doors with windows that opened for storage access behind the front seats. On the F-Series Super Duty models such as the F-250 and F-350, stepped driver’s side windows were introduced as an alternative to the traditional straight-across bottom that was traditionally seen on trucks for so many years.

Introduced in 2009, this generation gained a boost in fuel economy thanks to the new twin-turbo V6 EcoBoost motor recently designed by Ford.

The F-150 continues to be America’s best selling pickup over 40 years and continues its production of more than 60 years. This generation featured a huge reduction in weight due to a switch from using steel body panels to using aluminum, resulting in increased gas mileage and performance. The truck underwent a facelift at the beginning of this generation in 2015, and again in 2018.

The F-150 has proved its worthiness as a workhorse for the commercial contractor and farmer, as well as a suitable family vehicle for the homeowner. Ford shows no sign of slowing production and continues to churn these pickups out of the factory at an astonishing rate. If you have a Ford F-150 pickup in need of a windshield replacement, sidelite replacement, backglass slider replacement, or quarter glass replacement, use Glass.com to help you locate a local and reputable auto glass repair technician to get your glass replaced and get your Ford F-150 back on the road quickly.

You can quickly and easily find a reputable auto glass replacement shop near you, get an instant quote for the exact service you need for your Ford F Series F150 and book a convenient appointment. Many of our Affiliates even offer mobile service and will come to your home or business to perform the replacement. We’ll help to get your Ford F Series F150 back on the road as soon as possible!

We Make Getting a Quote and Booking an Appointment for Your Ford F Series F150 a Fast, Easy Process

When it’s time to repair or replace the windshield, backglass, or door glass on your Ford F Series F150, just log on to Glass.com® and fill out the user-friendly Request Estimate form. You’ll get instant access to our Affiliates in your local area, receive an immediate quote for the service you need and be able to book your appointment. Why waste time calling around to multiple repair shops?

Discover why so many people use Glass.com® for replacing the glass on their Ford F Series F150. Take a few minutes to browse our site and feel free to contact us for more information.