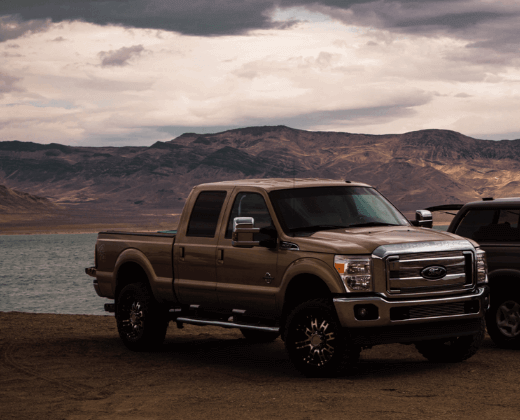 The windshield is an important safety element of your F Series F250. Not only do they keep out debris and the elements, they also help keep occupants inside the vehicle in the event of a crash. Sometimes they can be repaired, but often they require full replacement, depending on the severity of the damage.

Sunroofs add an element of fun to your everyday drive, but sometimes they break. Sunroofs typically are made from tempered glass which must be fully replaced if damaged.

Backglass acts as a way for you to see out of the rear of your vehicle. It typically is made from tempered glass which must be replaced if damaged.

Side windows offer access to fresh air, toll booths, drive-thru windows, and more. These highly functional pieces of glass are often a target for break ins though. If this happens to you, you’ll need to have the window replaced since it’s usully made from tempered glass, though laminated glass is gaining in popularity.

The Ford F-Series pickup has longtime been an American favorite when it comes to trucks. The Ford F-150 after all, is by far the world’s best selling truck. It sells nearly double the volume as the runner up—the Chevy Silverado. The F-150 doesn’t cut it for some drivers though. For those who need more power and the ability to towing large trailers or haul heavy loads, the next step up is the Ford F-250.

The F-250 has been around as a beefed-up version of the F-150 since the birth of the Ford F-Series’ first generation in 1948. It was aesthetically very similar to the F-150 in styling and interior finishes. However, Ford separated the F-250 and larger trucks into a new family called the Ford Super Duty series. The Ford F-Series Super Duty series hosts the modern Ford F-250 we recognize today. Its styling and size distinctly set it apart from the F-150. Besides being a much larger truck overall, the Ford F-250 Super Duty pickup has larger engine options, a stronger chassis, heftier suspension, and an increased towing and payload capacity. Put simply, the Ford F-250 is a truck that has the ability do some serious work. Not surprisingly, the F-Series Super Duty is the best selling heavy-duty truck, followed by the Dodge heavy-duty series, then the Chevrolet 2500/3500 HD.

The Ford F-250 Super Duty was relaunched under the new Super Duty series in 1999 with three available cab options including a two-door standard cab, four-door SuperCab, and a four-door crew cab. Bed lengths came in both 6 ¾-foot and 8-foot options. The new Super Duty line set itself apart from the old F-250 trucks with taller bodylines, a bigger grille, and lower fenders.

The sought-after 7.3L PowerStroke turbocharged diesel motor, known for its power and reliability was retired in 2003 due to emissions regulations. It had been in service since pre-Super Duty years, dating back to 1994. The 7.3L was replaced by the 6.0L PowerStroke turbocharged diesel motor. Unfortunately the 6.0L has many weak points which are now well-known, including the exhaust gas recirculation (EGR) system, fuel injectors, head bolts, oil cooler, and turbocharger.

The truck received a minor facelift in 2005 featuring both interior and exterior updates. Outside were new headlights, along with a new front bumper and grille. Performance upgrades came in the form of four-wheel disc brakes, larger wheels, and a more powerful gas motor. Inside, a driver’s side glove box was added for convenient storage. Auxilary switches and an integrated trailer brake became optional. The auxiliary panel switches allowed drivers to operate aftermarket add-ons such as fog lights, amber warning lights, snowplows and more.

The second generation Ford F-250 Super Duty was released in 2008 with a much-appreciated new PowerStroke 6.4L turbocharged diesel engine, which phased out the problematic 6.0L motor. The five-speed manual transmission was also removed from the lineup of powertrain options. The truck could be ordered in four trim levels including XL, XLT, FX4, and Lariat. The XL was a basic no-frills work truck with manual windows and locks. The XLT included power options and convenience items such as a tilt steering wheel and cruise control. The FX4 package was geared towards offroad driving with all-terrain tires and all-weather floor mats. At the top of the lineup was the Lariat featuring leather upholstery, a vehicle message center, woodgrain trim, and more.

In 2008 Ford released a special edition Harley-Davidson package for the F-250 and F-350 trucks. This package featured a two-tone black and copper leather interior, 20-inch wheels, blacked-out headlights, power-folding paint-matched mirrors, a rubber bed mat, and Harley-Davidson emblems throughout. Paint options included a Harley-esque all-black option, or two-tone black and copper to match the interior. In 2009 Ford offered the Harley-Davidson edition again but with an all-black interior. Paint colors expanded to include black with flames, black with blue flames, or dark blue with flames.

The third generation F-250 Super Duty was released in 2011 with a total interior and exterior overhaul. The truck was again available in four trim levels. However, the FX4 trim was dropped and a premium trim was added which provided options above and beyond what had previously been offered by the Lariat trim level. The new King Ranch trim added an upgraded leather interior, heated and cooled seats, remote start, and paint matched mirrors. The standard V8 gas motor was upgraded from the Triton 5.4L to a more powerful SOHC 6.2L. The 6.8L V10 continued to be offered without any power changes. The PowerStroke diesel motor increased in size from 6.4L to 6.7L which came with a significant bump in power as well. It gained 50 horsepower and 150 pound-foot of torque bringing total figures to 400 horsepower and 800 pound-feet of torque.

The fourth generation F-250 Super Duty was revealed two years prior to its actual release at the State Fair of Texas in 2015. It was officially released for sale for the 2017 model year and featured a total redesign built on a new platform. The truck’s frame is fully-boxed steel while the body is manufactured from aluminum, similar to the F-150. This generation, for the first time in the Super Duty series, shares the same cab as the F-150. The weight saved by moving to aluminum allowed Ford to add weight in other areas by upgrading to heavier duty driveshafts, axles, brakes, and transfer cases.

A Platinum trim level was added to the lineup, which sat above the King Ranch as the F-250’s premier trim level. It includes a panoramic sunroof as well as advanced driver assistance system (ADAS) features such as a blind spot information system (BLIS), adaptive cruise control, adaptive steering, and lane departure warning. On top of the Platinum trim, a Limited trim became available in 2018. This top trim level Super Duty became the world’s first $100,000+ production pickup truck when purchased as the F-450 Limited.

A refresh came in 2020 which updated the grille, rear end, and interior. The 6.7L PowerStroke motor received a boost in power, finally pushing it over the much sought after 1,000 pound-feet of torque level for a total of 1,050 pound-feet of torque and 475 horsepower. Ford has also announced the release of a highly-anticipated 7.3L gas motor called the Godzilla due to its sheer size. The Godzilla motor takes Ford back to its roots with a cast-iron block, forged steel crank and cam-in-block design. This no-frills motor aims to be simple, reliable, and powerful.

You can quickly and easily find a reputable auto glass replacement shop near you, get an instant quote for the exact service you need for your Ford F Series F250 and book a convenient appointment. Many of our Affiliates even offer mobile service and will come to your home or business to perform the replacement. We’ll help to get your Ford F Series F250 back on the road as soon as possible!

We Make Getting a Quote and Booking an Appointment for Your Ford F Series F250 a Fast, Easy Process

When it’s time to repair or replace the windshield, backglass, or door glass on your Ford F Series F250, just log on to Glass.com® and fill out the user-friendly Request Estimate form. You’ll get instant access to our Affiliates in your local area, receive an immediate quote for the service you need and be able to book your appointment. Why waste time calling around to multiple repair shops?

Discover why so many people use Glass.com® for replacing the glass on their Ford F Series F250. Take a few minutes to browse our site and feel free to contact us for more information.