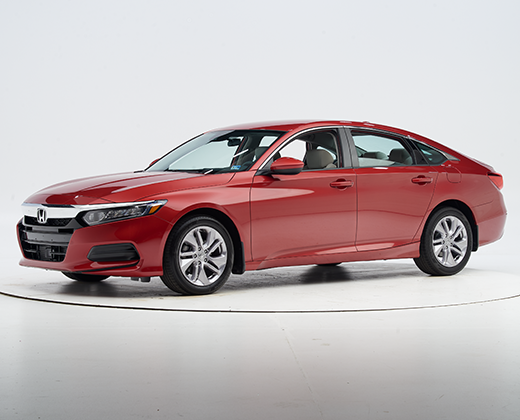 Need broken auto glass replaced on your Honda Accord?

The windshield is an important safety element of your Accord. Not only do they keep out debris and the elements, they also help keep occupants inside the vehicle in the event of a crash. Sometimes they can be repaired, but often they require full replacement, depending on the severity of the damage.

Sunroofs add an element of fun to your everyday drive, but sometimes they break. Sunroofs typically are made from tempered glass which must be fully replaced if damaged. If your Accord is equipped with a factory sunroof that has broken, you’ll need to get it replaced as soon as possible in order to avoid the possibility of water damage. Keep in mind that sunroofs can face a variety of problems, but Glass.com only provides glass replacement services on factory installed sunroofs.

Backglass acts as a way for you to see out of the rear of your Accord. It is also referred to as a back windshield or rear windshield. Rear windshields typically are made from tempered glass which must be replaced if damaged. These windows sometimes include additional features such as defrost elements which help to de-ice the glass in wintertime. Back windshields on hatchbacks, SUVs, and vans sometimes feature a wiper, which helps increase visiblity while driving in the rain.

Honda Accord Side Window Replacement

Side windows offer access to fresh air, toll booths, drive-thru windows, and more. These highly functional pieces of glass are often a target for break ins though. If this happens to your Accord, you’ll need to have the window replaced since it’s usully made from tempered glass, though laminated glass is gaining in popularity.

The Honda Accord was originally launched in 1976, five years after the release of Honda’s ever-popular Civic. The Accord was rumored to originally be a sports car—a Japanese competitor to the Ford Mustang. However, due to the 1970’s fuel crisis, Honda played upon the Civic’s success and followed suit, giving the Accord an economical four-cylinder engine. The Accord differed from the Civic in that more luxury options were standard and it a larger vehicle. The Accord didn’t take long to catch on and was the best selling Japanese vehicle in the United States for 16 consecutive years from 1982-1997. It has also made Car and Driver magazine’s 10 Best list 30 times and received countless other awards. The Accord is known for its reliability. It has also been produced in a number of different configurations which aided in establishing its practicality.

Honda’s first iteration of the Accord was released in 1976 in a three-door hatchback layout. The 68 horsepower motor utilized the same Compound Vortex Controlled Combustion (CVCC) technology as the Civic and achieved 44 miles per gallon (MPG) on the highway. It also came standard with a tachometer, intermittent wipers, and a radio.

In 1977 the Accord became available as a four-door sedan with a more powerful 72 horsepower motor. Beginning in 1978 an LX version of the model was added which boasted air conditioning, a digital clock, and power steering. The bumper, trim, taillights and side view mirrors were also slightly redesigned.

The second generation of the Honda Accord was released in 1981, marked by a more modern exterior and interior which, at the time, included shag carpet, velour interior trim, and chrome exterior trim. An intriguing option called the Electro Gyro-Cator became available as an option for this year. The Electro Gyro-Cator is claimed to be the first automotive navigation system. Honda partnered with Alpine and Stanley Electric Co. to develop the system. The option cost an additional $2,746 and did not return as an option in later model years.

In 1982 an optional four-speed automatic transmission replaced the three-speed, and power door locks became available as well. 1983 marked the beginning of Honda manufacturing Accords in the United States. A plant was opened in Marysville, OH, making them the first Japanese auto company to manufacture domestically. The Accord was also restyled this year with a sharper nose and new motor which bumped up to 85 horsepower. Cassette stereos, cruise control, and power brakes joined the line of upgrades offered on LX models.

A huge step forward was taken in 1984 when the Accord’s third generation became the first generation to offer a fuel injected motor rather than one equipped with a carburetor. A drastic restyle marked the start of this generation as well, earning it the Car of the Year award in Japan. The suspension was updated too with double wishbones which allowed for better handling. Optional upgrades now included heated mirrors, a digital instrument panel, sunroof, and climate control.

In 1989 the fourth generation Honda Accord again featured drastically updated aesthetics. The car as a whole increased in size. The hatchback format was removed from the lineup, leaving only the coupe and sedan. Available trim levels included DX, LX and EX—the latter two trim levels still being available on current Accords today. Motors were bumped up to 125 horsepower and optional accessories now included a CD player, fog lights, security system, and more. Models from 1990-1991 were equipped with motorized shoulder belts for front seat passengers.

Although still part of the same generation, an updated front fascia came out in 1992 which included updates to the grille, headlamps, parking lights, and side moldings. These changes were coupled with a more powerful motor, driver-side airbags, and anti-lock brakes

The Accord grew in size again in 1993 when the car was released on a new chassis. Other than an all-around facelift which featured more rounded body lines, the Accord remained largely unchanged in terms of features. It wasn’t until 1995 that the Accord became available for the first time with a V6 engine. It was also this year that body lines were rounded even further and updated headlights and tail lamps were installed.

The sixth generation Honda Accord was released in 1997 and ran until 2002. As in previous generations, it was available as the bare-bones DX trim-level which lacked a stereo and any interior power options, up to the EX trim level with leather and power amenities aplenty.

Accord’s seventh generation began in 2003 in North America when it grew in size again and was redesigned with new styling. A hybrid version became available in 2005 as well as a sporty V6 powered coupe featuring a 6-speed manual transmission which could reach from zero to 60 in just under six seconds.

The eighth generation of the Honda Accord debuted in 2008 when it increased in size again for a total combined interior space of 120 cubic feet. The hybrid version of the Accord was dropped in favor of featuring the hybrid option on smaller platforms such as the Civic. Additional updating came in 2011 when the Accord received updated styling. Changes included the front fascia, tail lamps, and available options such as paddle shifters, USB connectors, rearview cameras, and memory seats.

2012 sparked the ninth generation of the Honda Accord which, unlike previous generations, was only sold as a single North American production version. Accords came standard with an eight-inch LCD screen which hosted a backup camera, Bluetooth audio, hands-free calling, and climate control. Advanced Driver Assistance System (ADAS) features were also introduced as options. These included helpful safety features such as a forward-collision warning system, blind-spot indicator, lane departure warning, and adaptive cruise control.

The tenth and current generation of the Honda Accord was released in 2017 with modern styling both inside and out. All trim levels now come standard with Honda Sensing, their ADAS feature package. The standard engine is an even more powerful 192 horsepower variable valve timing and lift electronic control (VTEC) turbo four-cylinder attached to a continuously variable transmission (CVT). Other changes to the lineup include the discontinuation of the V6 motor and the discontinuation of the coupe.

Over the years and many generations, as the Accord has grown in size, so has the size of the glass. There is also much more technology built into today’s Accords than previous generations. Many of the ADAS features mentioned above utilize the windshield and may require recalibration if the windshield is replaced.

The Honda Accord has gained immense popularity since its original release. Although Honda is currently streamlining manufacturing to only offer a sedan platform, demand shows no signs of stopping anytime soon with well over a quarter-million units being sold annually.

You can quickly and easily find a reputable auto glass replacement shop near you, get an instant quote for the exact service you need for your Honda Accord and book a convenient appointment. Many of our Affiliates even offer mobile service and will come to your home or business to perform the replacement. We’ll help to get your Honda Accord back on the road as soon as possible!

Very friendly people! They were super helpful and had quick service. I 100% recommend

Very fast service and the price was over $100 less than competitors. Service Technician was very courteous and replaced the windshield expeditiously. Thank you!!!

King of Prussia, PA - Honda Accord

Tim came by and removed the fractured windshield. And we found out we could not have a new windshield installed due to rusty car roof. But Time explained everything to me and advised me to call ins company.

I applied for an appointment on-line on a Sunday. The next day, someone from the company called and we made an appointment for Wednesday. Early Wednesday, the installer called to set up a time. He showed up right on time, and within 45 minutes, he had replaced the windshield. He was polite and professional. I would have no problem using this company again.

We Make Getting a Quote and Booking an Appointment for Your Honda Accord a Fast, Easy Process

When it’s time to repair or replace the windshield, backglass, or door glass on your Honda Accord, just log on to Glass.com® and fill out the user-friendly Request Estimate form. You’ll get instant access to our Affiliates in your local area, receive an immediate quote for the service you need and be able to book your appointment. Why waste time calling around to multiple repair shops?

Discover why so many people use Glass.com® for replacing the glass on their Honda Accord. Take a few minutes to browse our site and feel free to contact us for more information.