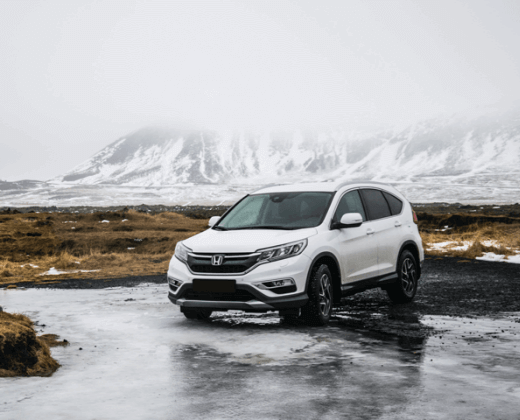 The windshield is an important safety element of your CR-V. Not only do they keep out debris and the elements, they also help keep occupants inside the vehicle in the event of a crash. Sometimes they can be repaired, but often they require full replacement, depending on the severity of the damage.

Sunroofs add an element of fun to your everyday drive, but sometimes they break. Sunroofs typically are made from tempered glass which must be fully replaced if damaged. If your CR-V is equipped with a factory sunroof that has broken, you’ll need to get it replaced as soon as possible in order to avoid the possibility of water damage. Keep in mind that sunroofs can face a variety of problems, but Glass.com only provides glass replacement services on factory installed sunroofs.

Backglass acts as a way for you to see out of the rear of your CR-V. It is also referred to as a back windshield or rear windshield. Rear windshields typically are made from tempered glass which must be replaced if damaged. These windows sometimes include additional features such as defrost elements which help to de-ice the glass in wintertime. Back windshields on hatchbacks, SUVs, and vans sometimes feature a wiper, which helps increase visiblity while driving in the rain.

Side windows offer access to fresh air, toll booths, drive-thru windows, and more. These highly functional pieces of glass are often a target for break ins though. If this happens to your CR-V, you’ll need to have the window replaced since it’s usully made from tempered glass, though laminated glass is gaining in popularity.

While Honda has been manufacturing the CR-V since 1995, it wasn’t until its introduction at the 1996 Chicago Auto Show that it became available for sale in the North American market in 1997. CR-V stands for “comfortable runabout vehicle,” and it is Honda’s mid-range utility vehicle, bigger than the HR-V and smaller than the Pilot.

Initially, there was only one trim level for the CR-V, the LX trim package, which came with a 2.0-liter straight-four B20B engine that produced 126 horsepower and a four-wheel double wishbone suspension. The vehicle came with a fold-out picnic table and back seats that could fold down. In the North American market, the bumpers, fender wells and grille, were covered in black plastic.

Changes were made halfway through the first generation. The engine changed to a 2.0-liter B20Z engine that produced 147 horsepower. In 2000 the North American market received a special edition model, the CR-V SE. The SE featured new exterior body colors with bumpers, side moldings and a hard spare tire cover that matched the body color instead of being covered in black plastic. The SE also had leather seats, a CD/cassette audio deck, rear privacy glass, a Navtech navigation system, and a chrome grille accent.

From 1995 until 2001 the Honda CR-V had a higher sales rate than any other vehicle in its class.

In addition, changes to the rear suspension increased cargo space to 72 cubic feet. The new rear-hatch design no longer required the glass hatch to be opened prior to the swinging door. With all of these changes, the second generation CR-V was Car and Driver magazine’s “Best Small SUV” for 2002 and 2003.

The rear of the vehicle underwent a change during the third generation. The spare tire was completely removed from the back of the vehicle, and the rear door was changed to a rear liftgate as opposed to a side-opening rear door. Manual transmissions were no longer an option along with the fold-out picnic table.

With this generation CR-V three trim levels are available, the LX, EX, and EX-L. The buyer could choose between a front-wheel or all-wheel drivetrain. All three trim levels came with a 2.4-liter four-cylinder engine with 166 horsepower and a five-speed automatic transmission.

The 2010 CR-V received changes that included a redesigned front fascia and rear bumper. The EX and EX-L models now sported five split-spoke 17-inch alloy wheels. New upholstery fabrics were used in the cabin and the front passenger armrests were enlarged. The information display backlighting in the gauges changed from black to blue.

The fourth generation Honda CR-V debuted at the 2011 Los Angeles Auto Show. The power for this model CR-V is the 2.4-liter i-VTEC inline-four engine that puts out 185 horsepower. For the first time, a backup camera was available for all trim levels as well as a five-inch multifunction center screen and Bluetooth connectivity. Optional features included dual-zone automatic climate control and a rear-seat DVD entertainment system.

The 2015 CR-V included additional improvements. The fuel economy was improved with the direct-injected ”Earth Dreams” engine and continuously variable transmission (CVT). The body of the vehicle was modified to improve its crash performance, and the suspension shock absorbers, springs, anti-roll bars and lower control arms were revised to improve ride performance. These changes resulted in the Honda CR-V being named Motor Trend magazine’s “2015 SUV of the Year.”

The fifth generation of the Honda CR-V increased the number of available trim levels to four – LX, EX, EX-L, and Touring. The LX model gets its power from a 2.4-liter 1-4 engine with 184 horsepower and two-speed continuously variable transmission (CVT) while the EX, EX-L and Touring models use a 1.5-liter 1-4 engine with 190 horsepower and two-speed CVT. All four trim levels can be paired with either front-wheel drive or an all-wheel drivetrain.

The cabin of the fifth generation CR-V included new features. An optional third row of seats allows for seven passengers in the vehicle. A new seven-inch thin-film-transistor (TFT) liquid-crystal display improves the contrast and image qualities of the gauges, and an updated seven-inch touch screen display allows passengers to use the Android Auto/Apple CarPlay systems.

On the exterior of the vehicle, new features include a power lift-gate and an active grille shutter system to reduce aerodynamic drag. All trim levels EX and up have LED daytime running lights, 18-inch alloy wheels and an electronic parking brake with a new auto-hold feature.

The 2019 Honda CR-V was named “Top Safety Pick” by the Insurance Institute for Highway Safety and “Compact SUV Best Buy” by Kelley Blue Book. If your award-winning CR-V is in need of a windshield replacement, sidelite replacement, or backlite replacement, use Glass.com to help you locate a local and reputable auto glass repair technician to get your glass replaced and quickly get your Honda back on the road.

You can quickly and easily find a reputable auto glass replacement shop near you, get an instant quote for the exact service you need for your Honda CR-V and book a convenient appointment. Many of our Affiliates even offer mobile service and will come to your home or business to perform the replacement. We’ll help to get your Honda CR-V back on the road as soon as possible!

Had an appointment two days after I contacted glass.com. The price was lower than expected and the work was done within one hour!

The men were excellent communicators, worked fast, were extremely polite. My car had a couple of broken brackets under the windshield moulding and one of the guys created new brackets to fit my car. The waiting room was the most comfortable waiting room I’ve ever waited in. Non fluorescent lighting. Big comfortable couch and chairs. Remote for TV. Ran bathroom.

We Make Getting a Quote and Booking an Appointment for Your Honda CR-V a Fast, Easy Process

When it’s time to repair or replace the windshield, backglass, or door glass on your Honda CR-V, just log on to Glass.com® and fill out the user-friendly Request Estimate form. You’ll get instant access to our Affiliates in your local area, receive an immediate quote for the service you need and be able to book your appointment. Why waste time calling around to multiple repair shops?

Discover why so many people use Glass.com® for replacing the glass on their Honda CR-V. Take a few minutes to browse our site and feel free to contact us for more information.