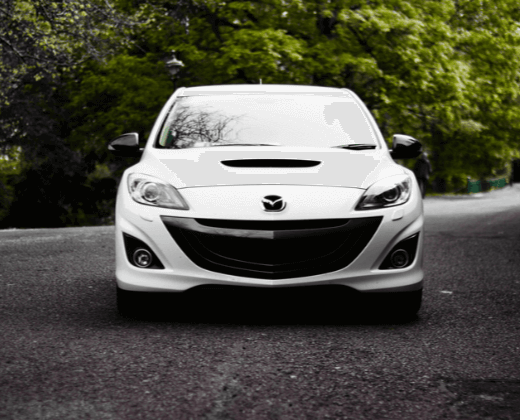 The windshield is an important safety element of your 3. Not only do they keep out debris and the elements, they also help keep occupants inside the vehicle in the event of a crash. Sometimes they can be repaired, but often they require full replacement, depending on the severity of the damage.

Sunroofs add an element of fun to your everyday drive, but sometimes they break. Sunroofs typically are made from tempered glass which must be fully replaced if damaged. If your 3 is equipped with a factory sunroof that has broken, you’ll need to get it replaced as soon as possible in order to avoid the possibility of water damage. Keep in mind that sunroofs can face a variety of problems, but Glass.com only provides glass replacement services on factory installed sunroofs.

Backglass acts as a way for you to see out of the rear of your 3. It is also referred to as a back windshield or rear windshield. Rear windshields typically are made from tempered glass which must be replaced if damaged. These windows sometimes include additional features such as defrost elements which help to de-ice the glass in wintertime. Back windshields on hatchbacks, SUVs, and vans sometimes feature a wiper, which helps increase visiblity while driving in the rain.

Side windows offer access to fresh air, toll booths, drive-thru windows, and more. These highly functional pieces of glass are often a target for break ins though. If this happens to your 3, you’ll need to have the window replaced since it’s usully made from tempered glass, though laminated glass is gaining in popularity.

The Mazda 3, also called the Mazda3, is Mazda’s best-selling model and it’s not hard to see why. Its roots trace back to 1977 when the Mazda GLC was released. The GLC was a three-door, rear-wheel drive hatchback similar to the Volkswagen Golf. The GLC was succeeded by the Mazda 323 in 1986, and then the Mazda Protégé in 1990. The 323 continued production through 1995 whereafter it was phased out. The Protégé then converted into the Mazda 3 in 2004.

The Mazda 3 lineage always aimed to provide a sporty and exciting ride at an unexpectedly low price point, which it has continued to do through the present model year.

The Mazda 3 was released to the American market in 2004 and was based on the European Ford Escort platform. Ford and Mazda had forged a partnership back in the 1970s which ran through 2011 when Ford sold its 33% stake in the company. During the partnership, Ford and Mazda shared many of the same platforms for their vehicles.

The Mazda 3 could be purchased as either a four-door sedan or a five-door hatchback and fell into the subcompact category. It was larger and sportier than previous renditions. The car received disc brakes with an anti-lock braking system (ABS) and electronic brake-force distribution all the way around. This new generation also featured front and rear anti-roll bars, and a rear multilink suspension borrowed from Ford.

Mazda released a sporty version of the Model 3 in 2007 dubbed the Mazdaspeed 3. It featured a 2.3-liter turbocharged motor pumping out 263 brake horsepower (bhp) and was paired with a six-speed manual transmission plus a limited-slip differential (LSD).

The second generation of the Mazda 3 launched for the 2010 model year with a completely redesigned exterior which looked much more bubbly than the previous generation. It was also longer, lighter and wider. The standard engine was upgraded from the 2.3-liter to a more powerful 2.5-liter engine. The i and s trim levels were still available and a third Grand Touring level provided bi-xenon headlights, dual-zone climate control, rain-sensing wipers, and a leather interior with power driver’s seat.

A short four years after the release of the second generation Mazda 3, a new generation was released for the 2014 model year. It went through a complete redesign and swapped from the Ford-derived C1 platform to Mazda’s SkyActiv chassis. This was the first Mazda 3 generation to utilize Mazda’s new SKYACTIV® TECHNOLOGY and it helped produce up to 30 miles per gallon (mpg) city and 41mpg highway. SKYACTIV® TECHNOLOGY is Mazda’s term for all-encompassing advancements in body, engine, chassis and transmission construction. Mazda’s goal is to make vehicles as fuel-efficient as possible without compromising on performance.

The new motor in the Mazda 3 featured an unusually high 13:1 compression ratio which helped to maximize power output while minimizing fuel intake. The Skyactive motors are also all-aluminum, making them lighter.

The fourth and current generation Mazda 3 was revealed during the 2018 Los Angeles Auto Show and began selling in 2019. All-wheel drive is now optional, with front-wheel driving continuing to be standard. An emphasis was placed on a “less is more” design both inside and out. It features hand-picked finishes meant to create an emotional bond between the driver and their car. A 2.5-liter motor comes standard paired with a six-speed automatic transmission. No other engine options are currently available. However, other premium options are available such as a full-color heads-up display (HUD) which projects pertinent information from the dash onto the windshield. Also available are rain-sensing wipers, driver attention alert, adaptive cruise control, lane departure warning, and a one-touch-open moonroof. It was named a 2019 IIHS Top Safety Pick. Trim levels range from Base to Select, Preferred, and Premium. It remains available in both sedan and hatchback configurations.

You can quickly and easily find a reputable auto glass replacement shop near you, get an instant quote for the exact service you need for your Mazda 3 and book a convenient appointment. Many of our Affiliates even offer mobile service and will come to your home or business to perform the replacement. We’ll help to get your Mazda 3 back on the road as soon as possible!

My experience with the Arrow Auto Glass Co. was great. Making the appointment was easy and the insulation was quick and efficient. Tim was very professional. I would definitely recommend your company to friends and family. Thank you.

Quick response. Cleaned up afterwards. Overall good experience. Concerns: No receipt given. Would only take cash or check. States credit card system was down. Promised to email receipt. Numerous attempts to get receipt with no response.

Never heard from them

We Make Getting a Quote and Booking an Appointment for Your Mazda 3 a Fast, Easy Process

When it’s time to repair or replace the windshield, backglass, or door glass on your Mazda 3, just log on to Glass.com® and fill out the user-friendly Request Estimate form. You’ll get instant access to our Affiliates in your local area, receive an immediate quote for the service you need and be able to book your appointment. Why waste time calling around to multiple repair shops?

Discover why so many people use Glass.com® for replacing the glass on their Mazda 3. Take a few minutes to browse our site and feel free to contact us for more information.