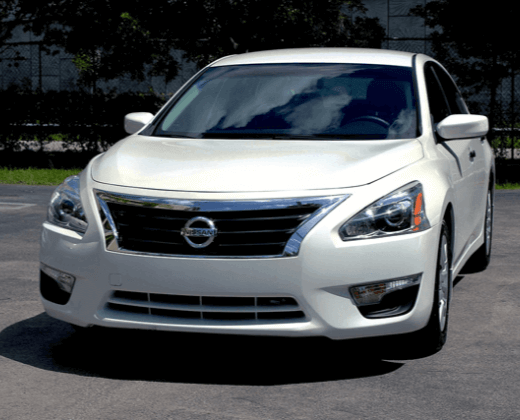 The windshield is an important safety element of your Altima. Not only do they keep out debris and the elements, they also help keep occupants inside the vehicle in the event of a crash. Sometimes they can be repaired, but often they require full replacement, depending on the severity of the damage.

Sunroofs add an element of fun to your everyday drive, but sometimes they break. Sunroofs typically are made from tempered glass which must be fully replaced if damaged. If your Altima is equipped with a factory sunroof that has broken, you’ll need to get it replaced as soon as possible in order to avoid the possibility of water damage. Keep in mind that sunroofs can face a variety of problems, but Glass.com only provides glass replacement services on factory installed sunroofs.

Backglass acts as a way for you to see out of the rear of your Altima. It is also referred to as a back windshield or rear windshield. Rear windshields typically are made from tempered glass which must be replaced if damaged. These windows sometimes include additional features such as defrost elements which help to de-ice the glass in wintertime. Back windshields on hatchbacks, SUVs, and vans sometimes feature a wiper, which helps increase visiblity while driving in the rain.

Side windows offer access to fresh air, toll booths, drive-thru windows, and more. These highly functional pieces of glass are often a target for break ins though. If this happens to your Altima, you’ll need to have the window replaced since it’s usully made from tempered glass, though laminated glass is gaining in popularity.

By the late 1980s, the Nissan Motor Company saw that it needed a car that could compete with the Honda Accord and the Toyota Camry. The Nissan Sentra was too small; the Nissan Stanza lacked the power and the styling necessary to be a contender, and the Nissan Maxima was priced too high to be truly competitive. The Nissan Motor Corporation put its San Diego design team to work on a solution, and the first Nissan Altima rolled off the Smyrna, Tennessee assembly line in 1992 and entered the North American mid-sized sedan market.

The Nissan Altima was a sales success with more than 120,000 cars sold in its first year—20 percent more than was projected. The Altima came in four versions. The stripped-down XE version came with manual windows while the mid-line GXE version was produced with power windows and a digital automatic heads up display (HUD). The sporty SE version delighted buyers with fog lights, a rear spoiler, side skirts, and sport seats. The luxury GLE version pampered its buyers with adjustable lumbar support seating, automatic digital climate control, keyless entry, sunroof, and a six-speaker cassette/CD stereo system.

These first generation Altimas were powered with a 150-horsepower, 2.4-liter dual-overhead camshaft (DOHC) engine paired with either a 4-speed automatic or 5-speed manual transmission. The car’s suspension provided satisfying handling with struts and stabilizer bars at both ends. The Altima was at the small end of the mid-sized sedan market and fit up to four passengers, but it was in the market and finding its niche.

The second generation of Nissan Altima, like its predecessor, was designed in California and manufactured in Tennessee. While the interior size of the car remained unchanged, the design and styling made it feel roomier and more comfortable. The additional equipment options and trim packages elevated buyers’ perceived quality of the car even though this second generation still used the same engine and offered the same fuel economy.

Sales of the second generation Altimas were not as strong as Nissan had hoped and nowhere near the Toyota Camry and Honda Accord, so midway through the second generation, Nissan developed the first limited edition of the Altima. The engine’s horsepower boosted up to 155, the length of the car increased, and the front end of the vehicle was redesigned along with the tail lights. The steering felt firmer to drivers due to the thicker stabilizer bars and the low profile tires. Side-impact airbags became options on the SE and GXE models and were standard on the Altima GLE.

The limited edition’s cabin improved with redesigned front seats that included a driver’s height adjuster and an instrument panel with a digital odometer. The rear window encased the antenna, and the keyless entry fob included a trunk release.

The third generation of the Altima saw big changes as the design and development teams took to heart the inspiration of sales and marketing vice president Al Castignetti who wanted to set the Altima apart from the Accord and Camry.
Numerous changes were made throughout the vehicle. The car became longer and 10 cubic feet were added to the interior. Four-wheel disk brakes became standard, the rear suspension incorporated a more advanced multi-link design, and buyers could opt for a 3.5 liter V6 engine.

All of these changes culminated in the Altima being recognized as both the 2002 North American Car of the Year and MotorWeek’s 2002 “Best of the Year.” For the first time the Nissan Motor Corporation competitive in the midsized sedan market, and sales took off.

On April 12, 2006, Nissan debuted the fourth generation of Altima at the New York Auto Show. While the interior of the vehicle now included 8 cup holders, hidden compartments and a much larger glove compartment, it remained relatively unchanged. New technology was introduced to the Altima line that included a push button start, the “Nissan Intelligent Key”, Bluetooth capability, and a rear parking camera.

The fourth generation of the Altima came with revised versions of the third generation engines, an upgraded rear suspension, and an anti-lock braking system with electronic brake-force distribution. Fuel economy increased in the 2.4-liter engine, and the 3.5-liter V6 engine strengthened to 270 horsepower.

The front of the fourth generation Altima was redesigned, the length of the vehicle was slightly decreased, and the wheelbase dropped by an inch. The cumulative design changes to the Altima resulted in the National Highway Traffic Safety Administration awarding the 2010 Altima the highest front-impact crash safety rating of five stars.

Another big change to the fourth generation Altima was the introduction of the Altima Hybrid to the lineup. Nissan tested the waters with a small production of this vehicle that was only sold in the United States. The Altima Hybrid adhered to California’s strict emissions standards and appealed to buyers that embraced the “going green” lifestyle. Unfortunately, sales were low, and Nissan discontinued the Altima Hybrid at the end of the 2011 model year.

The 2012 New York International Auto Show was again the site for the latest Nissan debut, the fifth generation Altima. Attendees were amazed that the 120-pound drop in weight was coupled with the vehicle’s increased size making it one of the lightest sedans in the North American market.

The fifth generation Altima lost more than weight. The 6-speed manual transmission was no longer an option, and the Altima coupe’s run ended in 2013. For the 2015 model year, Nissan removed the 3.5 S and the 3/5 SV from the lineup. The Altima moved away from its sport sedan image and embraced the family vehicle image.

The 2015 Altima saw additional changes to the exterior of the vehicle. The body of the car had an angular and sculpted body making it more aerodynamic, and the front of the car’s new design showed a more defined grille and improved headlights. Drivers of the Altima also saw improved mileage while enjoying the NASA-inspired “zero gravity” front seats.

The Insurance Institute of Highway Safety named the 2017 Altima a “Top Safety Pick,” and Nissan marketed the fifth generation Altima as a safe, family-friendly sedan. Buyers were impressed with the Altima’s safety ratings and design features, and, in 2017, the Altima outsold the Ford Fusion, Chevrolet Malibu, Subaru Outback and Toyota Highlander.

The latest generation Altima is built with two engine options - the base model 2.5-liter, four-cylinder engine that produces 188 horsepower and the turbocharged 4-cylinder engine with 248 horsepower. The Nissan Motor Corporation continued adding technological advancements to the Altima. The sixth generation Altima boasts the inclusion of the “Nissan ProPilot Assist,” a semi-autonomous driving option. Other features that are now standard with the Altima include keyless access and push-button start, forward collision warning with automatic emergency braking, an eight-way power driver’s seat and an eight-inch customizable dashboard touchscreen with Apple CarPlay and Android Auto.

The latest in-car infotainment system is the NissanConnect which combines entertainment, in-car navigation, and hands-free communication through the use of a smartphone, voice commands, and the touchscreen console. Drivers and passengers can stay connected to their Twitter and Google accounts as well as access weather and traffic updates, movie listings, Facebook, Pandora, and SiriusXM satellite radio. Nissan service centers can also use this system to update the vehicle’s software systems.

No matter which model Nissan Altima you drive, a foundation generation or the latest generation with all the bells and whistles, if your car requires a windshield replacement or a sidelite or backlite replacement, use Glass.com to help you locate a local, reputable, auto glass repair technician to replace your vehicle’s glass and quickly get you and your Nissan Altima back on the road.

You can quickly and easily find a reputable auto glass replacement shop near you, get an instant quote for the exact service you need for your Nissan Altima and book a convenient appointment. Many of our Affiliates even offer mobile service and will come to your home or business to perform the replacement. We’ll help to get your Nissan Altima back on the road as soon as possible!

He was one of the nicest people we have ever known and he did a super job, he even shook hands with my 92 year old mother.
We would recommend your company any day.

We Make Getting a Quote and Booking an Appointment for Your Nissan Altima a Fast, Easy Process

When it’s time to repair or replace the windshield, backglass, or door glass on your Nissan Altima, just log on to Glass.com® and fill out the user-friendly Request Estimate form. You’ll get instant access to our Affiliates in your local area, receive an immediate quote for the service you need and be able to book your appointment. Why waste time calling around to multiple repair shops?

Discover why so many people use Glass.com® for replacing the glass on their Nissan Altima. Take a few minutes to browse our site and feel free to contact us for more information.