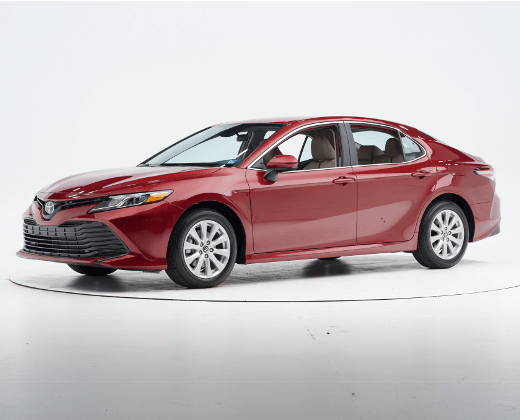 The windshield is an important safety element of your Camry. Not only do they keep out debris and the elements, they also help keep occupants inside the vehicle in the event of a crash. Sometimes they can be repaired, but often they require full replacement, depending on the severity of the damage.

Sunroofs add an element of fun to your everyday drive, but sometimes they break. Sunroofs typically are made from tempered glass which must be fully replaced if damaged. If your Camry is equipped with a factory sunroof that has broken, you’ll need to get it replaced as soon as possible in order to avoid the possibility of water damage. Keep in mind that sunroofs can face a variety of problems, but Glass.com only provides glass replacement services on factory installed sunroofs.

Backglass acts as a way for you to see out of the rear of your Camry. It is also referred to as a back windshield or rear windshield. Rear windshields typically are made from tempered glass which must be replaced if damaged. These windows sometimes include additional features such as defrost elements which help to de-ice the glass in wintertime. Back windshields on hatchbacks, SUVs, and vans sometimes feature a wiper, which helps increase visiblity while driving in the rain.

Side windows offer access to fresh air, toll booths, drive-thru windows, and more. These highly functional pieces of glass are often a target for break ins though. If this happens to your Camry, you’ll need to have the window replaced since it’s usully made from tempered glass, though laminated glass is gaining in popularity.

The Toyota Camry is the mid-size big brother to the Toyota Corolla. Its roomy interior and cushy features, coupled with excellent crash test ratings and top-notch reliability helped to make it the number one selling car in the US for many years. Starting off from hunble beginnings as a compact first first launched only to the Japanese market, it has now grown into a vehicle sold nationwide with sporty styling. Check out the unique history we’ve compiled below. If your Toyota Camry is in need of a windshield, sidelite, or back glass replacement, use Glass.com to find a local replacement shop near you.

The first generation of the Toyota Camry debuted in 1982 as a small four-door sedan with front-wheel drive. It became available as a five-door liftback not long after its initial release. The fuel efficient compact sedan was Toyota’s rebuttal to Honda’s Accord. Many manufacturers at the time were scrambling to create economical cars due to a fuel crisis. The next year, in 1983, the Camry was exported from Japan to North America. It was also released to Europe and Australia in the same generation. This is a feat that many foreign manufacturers don’t reach until later years. The Camry was equipped standard with a four-cylinder motor paired to a five-speed manual transmission. The motor could either be had as a 1.8-liter turbocharged diesel motor, or a naturally aspirated 2.0-liter gas engine. An automatic transmission became optional. One notable feature of the Camry was a sensor that monitored brake pad wear and alarmed when replacement was needed.

The second generation Toyota Camry was released in 1986 which brought a more Americanized design that featured sleeker, aerodynamic lines. A station wagon was released, replacing the five-door liftback. Toyota attempted to surpass its competition by focusing on details and using quality parts. Close attention was paid to body lines, gaps, braking, and noise dampening. A V6 motor became available as an option. All motors discontinued the use of a carburetor in favor of reliable and fuel efficient fuel injection. American-manufactured Camrys became available in 1988 from Toyota’s manufacturing plant in Kentucky. Three trim levels were available including the base trim, DX, and LE.

The third generation Toyota Camry launched in 1990 in Japan and was then released to North America the following year in 1991. A new, rounder body style brought the car into the modern era. The car also grew in length and width. The North American version actually was larger than the Japanese version, satisfying the American markets needs and setting it apart further from the smaller Toyota Corolla.

The fourth generation Toyota Camry was released at the end of 1996 with styling updates that gave it a larger, most pronounced, front fascia and rear end. Power increased for both the four-cylinder and V6 motors. Automatic transmissions became standard on all but the base model trim level.

In 2001, the fifth generation Toyota Camry hit the market. For the first time since near its inception, the sedan became the only option as the wagon version was dropped from the Camry’s lineup. Minivans and SUVs had taken over the market and wagons were no longer popular. However, the sedan gained size as well as engine updates. There were also body updates which gave the Camry a more aerodynamic front end and body contouring.

The sixth generation Camry began selling in 2006 and, for the first time, could be ordered as a gas/electric hybrid vehicle. This bumped up fuel efficiency by nearly 10 miles per gallon on average. Power door locks, stability control, and traction control were now all standard features, even on base models.

The seventh generation Toyota Camry landed in 2011 with major restyling- both inside and out. A new front fascia gave the car, for the first time, a sporty look. Power increased due, in part, to a switch to electric-powered hydraulic steering which put less load on the motor. Many trim levels were available including the L, LE, SE, XLE, SE V6, XLE V6, Hybrid LE, Hybrid XLE, and Hybrid SE. Due to a shifting market (no pun intended) manual transmissions were no longer offered, in favor of the six-speed automatic transmission. Hybrids were equipped with a continuously variable transmission (CVT) and the Sport Edition (SE) came with paddle shifters. Fuel efficiency was increased across the board due to improved aerodynamics and lighter curb weight.

The eighth and current generation of the Toyota Camry came to market in 2017 when it was relaunched on a totally new platform called Toyota New Global Architecture that it also shares with the Toyota Prius and C-HR. This fresh platform meant that no parts of the car, sans the logo, were shared with previous generations.

You can quickly and easily find a reputable auto glass replacement shop near you, get an instant quote for the exact service you need for your Toyota Camry and book a convenient appointment. Many of our Affiliates even offer mobile service and will come to your home or business to perform the replacement. We’ll help to get your Toyota Camry back on the road as soon as possible!

Service was awesome! Joyce (their coordinator) and Jason (their installer) were both courteous and professional.

Originally was unsure when scheduling the appointment as their price was much much less than what Safelite had quoted me for the same service. In my experience you get what you pay for, but I am always willing to try something new at least once, because you just never know. Needless to say, I was extremely satisfied with the work that was done. I will definitely be bragging and recommending "Binswanger Glass 088 Houston" to all my friends on all my social network accounts. The installers name was Magana Lazaro and he was obviously experienced with glass installation. He called me first thing in the morning to confirm my appointment and gave me an accurate ETA, which was surprising, and he was very professional. Thanks again for the great work.

Had broken glass that after taking to safelite for repair they weren't able to fix. Went online looking for quotes given that my dictible was $500. Binswanger was the only shop that came back with an affordable and great reviews quote. I input my info and the very next day received a call from Susan regarding the quote. I needed a special part due to the electronics on my car but Susan was able to requote and the price I paid was no where near my insurance deductible. After speaking to Susan she was able to get me in for the repair that same afternoon. It took 2 hrs for replacement windshield to be completed. They did a great job and have great customer service.

The technician showed within the time frame I was given. He was courteous and completed the job in good time. I have no complaints and these days that is commendable. The shop did not reach out to me within four hours of me booking the appointment because I booked it the night before when they were closed. Thank you.

Technician showed up on time and did the work in a little over 1 hr. Great job he did. The price was very good as well.

The night before, it looked like there were no openings according to the website. Checking again early the next day. I was able to get one of the earliest slots and head in to work afterward, only an hour late for work ...at the other end of the county. Great result! Workers cleaned my car of broken glass wonderfully well, too. Everyone was friendly and helpful.

We Make Getting a Quote and Booking an Appointment for Your Toyota Camry a Fast, Easy Process

When it’s time to repair or replace the windshield, backglass, or door glass on your Toyota Camry, just log on to Glass.com® and fill out the user-friendly Request Estimate form. You’ll get instant access to our Affiliates in your local area, receive an immediate quote for the service you need and be able to book your appointment. Why waste time calling around to multiple repair shops?

Discover why so many people use Glass.com® for replacing the glass on their Toyota Camry. Take a few minutes to browse our site and feel free to contact us for more information.