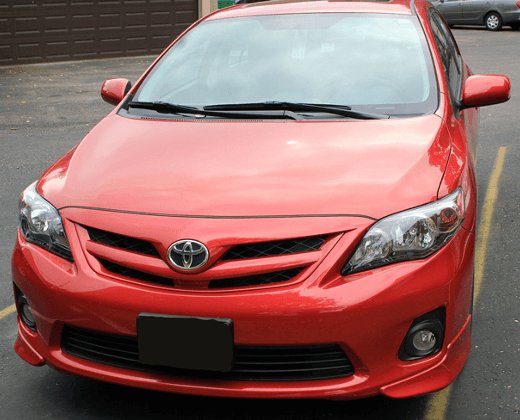 The windshield is an important safety element of your Corolla. Not only do they keep out debris and the elements, they also help keep occupants inside the vehicle in the event of a crash. Sometimes they can be repaired, but often they require full replacement, depending on the severity of the damage.

Sunroofs add an element of fun to your everyday drive, but sometimes they break. Sunroofs typically are made from tempered glass which must be fully replaced if damaged. If your Corolla is equipped with a factory sunroof that has broken, you’ll need to get it replaced as soon as possible in order to avoid the possibility of water damage. Keep in mind that sunroofs can face a variety of problems, but Glass.com only provides glass replacement services on factory installed sunroofs.

Backglass acts as a way for you to see out of the rear of your Corolla. It is also referred to as a back windshield or rear windshield. Rear windshields typically are made from tempered glass which must be replaced if damaged. These windows sometimes include additional features such as defrost elements which help to de-ice the glass in wintertime. Back windshields on hatchbacks, SUVs, and vans sometimes feature a wiper, which helps increase visiblity while driving in the rain.

Side windows offer access to fresh air, toll booths, drive-thru windows, and more. These highly functional pieces of glass are often a target for break ins though. If this happens to your Corolla, you’ll need to have the window replaced since it’s usully made from tempered glass, though laminated glass is gaining in popularity.

The Toyota Corolla began selling in 1966 and in under ten years, became the best selling car in the world. Total sales, at a staggering 46 million Corollas sold, has surpassed every other make and model in history. In comparison, the Honda Civic has sold over approximately 17 million. The Corolla has a reputation for rock-solid reliability as well as being equipped with quality safety and tech features.

Toyota’s Corolla is considered a subcompact or compact car. It actually gained its name from its mid-to-full size predecessor, the Toyota Crown. Corolla is Latin for “small crown” which was appropriate, given that it was a smaller version of the Crown. Toyota has had manufacturing facilities in 18 countries, including 6 in the United States alone.

The Toyota Corolla first debuted in November of 1966. This first generation is also known as the E10 model. It was available with a 1,100 cubic centimeter (cc) pushrod motor and became available as a fastback in 1968. The Corolla was originally a rear-wheel-drive car equipped with a 4-speed manual transmission or an optional 2-speed automatic transmission. In addition to the fastback configuration, the Corolla was also available as a 2-door sedan, 4-door sedan, and 4-door wagon. It was originally sold exclusively by the Toyota Auto Store in Japan and was not yet available in North America.

The second generation of the Toyota Corolla, also known as the E20, came with a restyle in 1970 when the body became more rounded. The Corolla was now available in North America, as well as Australia. Larger 1,400 and 1,600 cc motors also became available with the new generation. A higher trim level, the Corolla Levin, became available with a performance double overhead camshaft motor in 1972. Toyota began distribution to Indonesia in 1971. This generation was available as a coupe, sedan, wagon, or van.

The third generation of the Toyota Corolla, also known as the E30, became available in 1974 and ran through 1981. This generation was marked by a larger, heavier car featuring more rounded body lines. In North America a 2-door and 4-door sedan, wagon, hardtop coupe, sports coupe, and 3-door liftback were available. A Deluxe model offered optional features. This third generation of Corollas also marked its entry into the European market.

The fourth generation Toyota Corolla, debuting in 1979, featured a drastic facelift that squared off the body lines, especially the front and rear bumpers. The suspension was upgraded to a rear coil spring five-link rear end. Power steering also became available and the drivetrain was reconfigured from rear-wheel drive to primarily front-wheel drive in 1983, which it remains as today. Also In 1983, the one-millionth Toyota was produced, commemorated by a “One Million Edition” Corolla exclusive to the Japanese market.

In 1983 the fifth generation of the Toyota Corolla, the E80, was released with sharper body lines and a front-wheel drive layout. It was available with Sequential Overhead Cam (SOHC) and Direct Overhead Cam (DOHC) motors in four-door liftback, four-door sedan, and two-door hatchback configurations. There was still one performance model, the AE86, which featured a rear-wheel drive drivetrain. The AE86 began a racing career in 1985 that ran through the rest of the generation’s life.

The sixth generation, the Toyota Corolla E90, began selling in 1987. Although this generation’s design was very similar to the fifth generation, the Corolla began to feel somewhat modern at this point. In Africa, this specific generation lasted all the way through 2006. It was also the last generation that would be considered a subcompact car. Later generations would all be labeled as compact cars.

It was offered in numerous trim levels, multiple formats and with different motors. There was even a high performance trim called the GT-i. The GT-I was offered with a 4A-GE motor that was co-developed with help from the Yamaha Motor Corporation.

In 1991 Toyota released the E100 Corolla which was an all-around larger vehicle than previous generations. The larger format pushed it into the compact car class. Body lines were much more rounded than before, which aided in aerodynamics.

The eighth generation Toyota Corolla underwent a slight redesign in 1997 when the headlights, tail lights and hubcaps were restyled. The next year in 1997 the wagon was discontinued as well as the coupe, leaving only the four-door sedan. For the first time since the Corolla’s inception, all units were produced by North American factories, rather than being shipped from oversees.

The ninth generation Toyota Corolla was released in North America in 2002. It was longer, wider, had new interior features, and more rounded body lines. The look was refreshed in 2005 with a new grille, tail lights, hubcaps, and interior features.

The tenth generation Toyota Corolla was introduced in 2007. It included a facelift but remained similar to the previous generation. Upgrades were aplenty from electronic power steering to upgraded suspension, interior materials, and more.

The twelfth, and present generation Toyota Corolla, was released in 2018. A hatchback version was reintroduced for this generation. A 2.0-liter motor pairs with either a six-speed manual transmission or a 10-speed automatic transmission which can provide an impressive 35 mile per gallon average. Tech features abound, including an infotainment system and Toyota Safety Sense, which integrates collision avoidance features.

You can quickly and easily find a reputable auto glass replacement shop near you, get an instant quote for the exact service you need for your Toyota Corolla and book a convenient appointment. Many of our Affiliates even offer mobile service and will come to your home or business to perform the replacement. We’ll help to get your Toyota Corolla back on the road as soon as possible!

It was friendly, very nice and good service

The price was great. Technician was friendly and professional. Would HIGHLY recommend Glass Dawg to anyone

Jim came out around noon to install my windshield. He did a great job. He even put back my service sticker in the upper left side of the windshield.

I had a rock hit my windshield, and the crack went from 3 inches to spreading to thru the whole bottom of the windshield within a matter of 2 days.
I filled out the form on glass.com and picked arrow glass. The confirmation calls were picked up as spam by my phone. When I called arrow glass to find out why I did not receive a confirmation, they informed me that 2 calls were made, and that both went to voice mail. Arrow glass went out of their way to setup the appointment for the next day at a time that was convenient for me.
The installer called at 7:30 letting me know what time he would be at my house, and he gave me a 2 hour time frame of 10 am and noon. He showed up at 10:10 am and was finished with the installation within 35 to 40 minutes. He was extremely courteous and professional.
I would highly recommend this company to anyone needing glass installation, and I will definitely recommend them, and use them for all my glass needs. I am one satisfied customer.

We Make Getting a Quote and Booking an Appointment for Your Toyota Corolla a Fast, Easy Process

When it’s time to repair or replace the windshield, backglass, or door glass on your Toyota Corolla, just log on to Glass.com® and fill out the user-friendly Request Estimate form. You’ll get instant access to our Affiliates in your local area, receive an immediate quote for the service you need and be able to book your appointment. Why waste time calling around to multiple repair shops?

Discover why so many people use Glass.com® for replacing the glass on their Toyota Corolla. Take a few minutes to browse our site and feel free to contact us for more information.