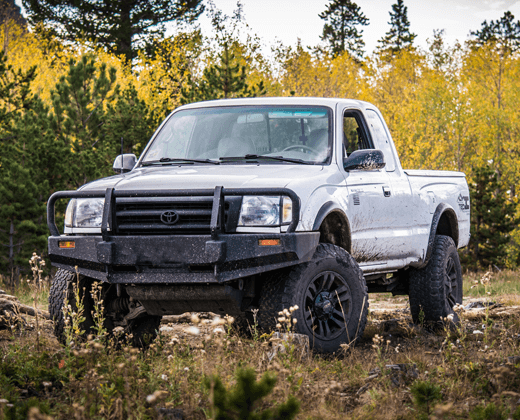 The windshield is an important safety element of your Tacoma Pickup. Not only do they keep out debris and the elements, they also help keep occupants inside the vehicle in the event of a crash. Sometimes they can be repaired, but often they require full replacement, depending on the severity of the damage.

Sunroofs add an element of fun to your everyday drive, but sometimes they break. Sunroofs typically are made from tempered glass which must be fully replaced if damaged. If your Tacoma Pickup is equipped with a factory sunroof that has broken, you’ll need to get it replaced as soon as possible in order to avoid the possibility of water damage. Keep in mind that sunroofs can face a variety of problems, but Glass.com only provides glass replacement services on factory installed sunroofs.

Backglass acts as a way for you to see out of the rear of your Tacoma Pickup. It is also referred to as a back windshield or rear windshield. Rear windshields typically are made from tempered glass which must be replaced if damaged. These windows sometimes include additional features such as defrost elements which help to de-ice the glass in wintertime. Back windshields on hatchbacks, SUVs, and vans sometimes feature a wiper, which helps increase visiblity while driving in the rain.

Side windows offer access to fresh air, toll booths, drive-thru windows, and more. These highly functional pieces of glass are often a target for break ins though. If this happens to your Tacoma Pickup, you’ll need to have the window replaced since it’s usully made from tempered glass, though laminated glass is gaining in popularity.

The Toyota Tacoma is the number one midsize truck in America. It accounts for nearly half of all sales, and it’s not hard to see why. This versatile vehicle looks and feels at home on offroad trails, just as much as it does picking the kids up from school. The Tacoma also has a reputation for rock-solid reliability, albeit some rust issues in the earlier generations.

It’s not a very old truck, either. The Tacoma has made quite the splash in just three generations of manufacturing. However, it evolved from the lineage of the Toyota Pickup which was available to the Japanese market starting in 1968, and the US market starting in 1972. A 1985 SR5 Toyota Pickup even received some Hollywood screen time in the movie Back to the Future.

The first generation Toyota Tacoma hit the American market in 1995. It was available as a regular cab or an extended cab pickup with three engine options including 2.4-liter and 2.7-liter four-cylinder engines and a 3.4-liter V6 motor. These engine options could be paired with either a four-speed automatic transmission or a five-speed manual. These two and four-wheel drive trucks sold quite well, especially to younger buyers.

There was a minor facelift to the truck in 1997 which updated the grille and headlights. Improvements were also made by switching to coil-on-plug ignition, increasing suspension performance, and adding a passenger-side airbag. A performance Toyota Racing Development (TRD) off-road package was offered beginning in 1998. The TRD package included typical off-road features such as a locking rear differential. Then another facelift took place in 2000 when a crew cab was offered for the first time.

The first generation ended in 2004, but it wasn’t until 2008 that major issues with the first generation of trucks forced Toyota to issue a recall. This issue was triggered by widespread frame corrosion. Trucks from 1995 through 2004 that suffered from rust holes in the frame would either be repaired, replaced, or bought back by Toyota.

Despite the rust issues, sales continued to increase. By the end of the first generation, the Tacoma had beat out the Nissan Frontier and Dodge Dakota in sales, and it was on the heels of the Ford Ranger.

2008 marked the beginning of Tacoma trucks coming standard with Toyota’s Star Safety System. This safety package included stability control, traction control, side airbags, head restraints, and side curtain airbags which were automatically deployed by a rollover sensor. The truck earned five-star crash test ratings across the board, except for the rollover category where it received four stars.

A major change took place in 2009 when Toyota announced it would relocate Tacoma manufacturing from Fremont, California to San Antonio, Texas where both of its trucks- the Tacoma and the Tundra- would be manufactured. The move brought about 1,000 new jobs to the area. In addition, the Tacoma received a facelift which updated the grille, swapped conventional tail lights for LEDs, and made audio system upgrades available.

More updates were made in 2012 when the front bumper, grille, headlights, hood and interior were all restyled. The very next year, a touch screen head unit became standard. The popularity of crew cab pickups caused the demand for standard cab pickups to dwindle and Toyota dropped the standard cab option starting in 2015.

Toyota was haunted again in 2016 by frame rust issues from a previous generation. The company again agreed to inspect, repair and replace rusted frames. This time the settlement was for trucks from 2005-2010.

The third, and current generation of the Toyota Tacoma, made a huge splash when it hit the market in 2015. The truck had been completely restyled with a more aggressive design. The bigger grille and slim, projector headlights gave the truck a mean look. The drivetrain was totally revamped with a new 2.7-liter inline-four motor or an optional 3.5-liter V6. These could be paired with either a five or six-speed manual transmission, or a six-speed automatic. These new powertrains were more powerful and more fuel-efficient. However, towing capacity increased only slightly from 6,500 pounds to 6,800 pounds. Upgrades were also made to increase frame strength, reduce weight, improve suspension, and decrease cabin noise. The interior was redesigned to be more luxurious and aesthetically appealing.

TRD trim levels received multi-terrain select modes for rock, rock and dirt, mogul, loose rock, or mud and sand. TRD Pro trim levels also received a crawl control feature which is similar to cruise control for off-road use. The crawl control feature controls acceleration and braking at low speed which can be useful for allowing the driver to focus on steering while navigating difficult obstacles. Additionally, crawl control can help get a driver unstuck from deep mud or sand. Unlike normal four wheel drive systems, the crawl feature can send power to individual wheels, depending on where power is needed. This exacting control can allow a driver to get out of some situations where a tow truck would otherwise be necessary. The crawl control feature is also an optional feature available on regular TRD models.

Toyota Safety Sense™ became standard on all Tacomas starting in 2018. These features include lane departure alert, automatic high-beams, stability control, traction control, and Smart Stop Technology®. Many of these Advanced Driver Assistance System (ADAS) features use hardware that is incorporated into the windshield, such as RADAR and LIDAR sensors. 2020 also brought about a minor facelift when a new grille was added. More notably, the stereo headunit received an upgrade and is now compatible with Apple CarPlay, Android Auto, and Amazon Alexa.

You can quickly and easily find a reputable auto glass replacement shop near you, get an instant quote for the exact service you need for your Toyota Tacoma Pickup and book a convenient appointment. Many of our Affiliates even offer mobile service and will come to your home or business to perform the replacement. We’ll help to get your Toyota Tacoma Pickup back on the road as soon as possible!

My only knock is I originally clicked on the question that said my sunroof had a leak. I was immediately told there was nothing to be done and I should contact the dealer.
This was bad information.
Second time around, I didn't answer the question. I was put in contact with Brandon Davis at Sunroof Express in Troy, MI and we were able to find exactly what I needed (which was no simple task...)

prompt, professional service. He had a hard time getting all the old seal removed, ( it was 23 years old), but finally got it and the replacement looks great.

Confirmed price and arranged appointment via email. Installer arrived on time after a phone call saying he was on his way. Quick install, looked very efficient. Cleaned up the area around the windshield. Took away the old windshield and gasket etc. I would not hesitate to use Binswanger Glass again.

Keith did a very professional job. In addition, I would like to thank him for taking the time to make sure I know what I needed to do to get the replacement stickers for the window and the time frame I have to obtain them for a service center.

If the opportunity arises I will certain let my friends know of your quality service and availability in the area.

Great...The Gentleman came out on time and did great job...Thank you for coming out , especially on July 4, ....
Joseph McCarthy
Journeyman
irishmenjoe@gmail.com

We Make Getting a Quote and Booking an Appointment for Your Toyota Tacoma Pickup a Fast, Easy Process

When it’s time to repair or replace the windshield, backglass, or door glass on your Toyota Tacoma Pickup, just log on to Glass.com® and fill out the user-friendly Request Estimate form. You’ll get instant access to our Affiliates in your local area, receive an immediate quote for the service you need and be able to book your appointment. Why waste time calling around to multiple repair shops?

Discover why so many people use Glass.com® for replacing the glass on their Toyota Tacoma Pickup. Take a few minutes to browse our site and feel free to contact us for more information.